10 Most Hilarious Anime Ever

Anime addicts, this question is for you: do you think in anime art format? Like when you are sad, do you imagine blue and black straight lines coming down your forehead? Or when you are caught in an absurdly funny situation, do you imagine your body converting into a white worm-like shape to lopsidedly employ the full effect of the humor? Well then you must agree with this list completely. Hope we can together help out those souls in need of the happy drug through this list of the most hilarious anime to ever have been created. 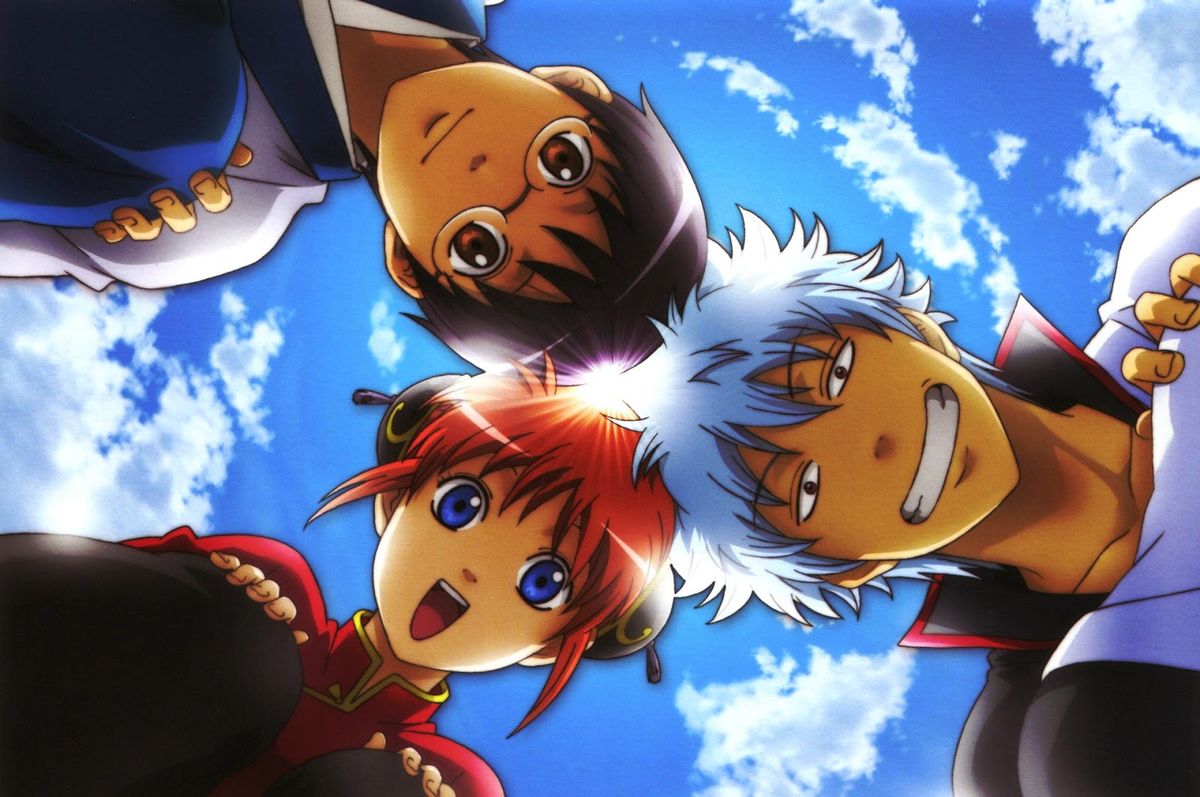 Yes, you may have heard this many times, but the only way to describe Gintama is to imagine it as an anime version of Family Guy, but with some amazing fights spruced in here and there and the character relations not being that of a family, but of three friends trying to do odd jobs to pay off their rent, and their various misadventures. The main story is of course, stranger- set in the Edo period of Japan, attacked by aliens: samurai action along with sci-fi. The show parodies anything and everything, and the 300+ episodes speak for themselves. Honestly, Gintama does not even belong to any genre of anime, it feels episodic at times with nothing specific to focus on, like a parody of shounen. But then! – you suddenly feel sucked into an intense fight executed perfectly to the dot, and then again a laugh right in another episode.

The Disastrous Life of Saiki K.

A pink-haired genius protagonist with gifted psychic superhuman powers and his daily struggles to continue living amidst the extremely mundane humans with wits not even close to the normal human IQ. Sometimes multi-episodal like Gintama with no overarching plot, but just Saiki always complaining about his unwanted friend group that he has to save from time to time, without letting them know about his powers. These friends and not-to-mention his loveable parents provide enough gag material but not in a cringy way. It is made for broad audiences. You can watch it even if you’ve never watched anime before. Three middle school girls, regular school life, adolescence and friendship- that is the impression you get from looking at the Anime/manga cover. Except you are absolutely and completely wrong because this is the most bizarre trio to ever exist in the virtual. You know how some anime have one kind of vibe in their intro and you start watching it, and then you are absolutely dumbfounded because everything is wildly different from what you expected? This is that kind of anime. Everything from the ridiculous art style to the absolutely throat-killing voice acting hits the mark and send you into hysterics of laughter. Just like Asobi Asobase, with a slightly different story, this is one of the funniest anime out there with the most heartfelt characters. It follows the lives of high school girls, ordinary and mundane, yet comically insane- you know how we used to be growing up? Silly pranks, trying to outsmart a friend, creating a nuisance randomly- except… there is a talking cat, an Android girl and a kid scientist…It just gets weirder and weirder as the plot progresses and yet somehow contributes to the plot in a very unexpected manner which makes the show even funnier. 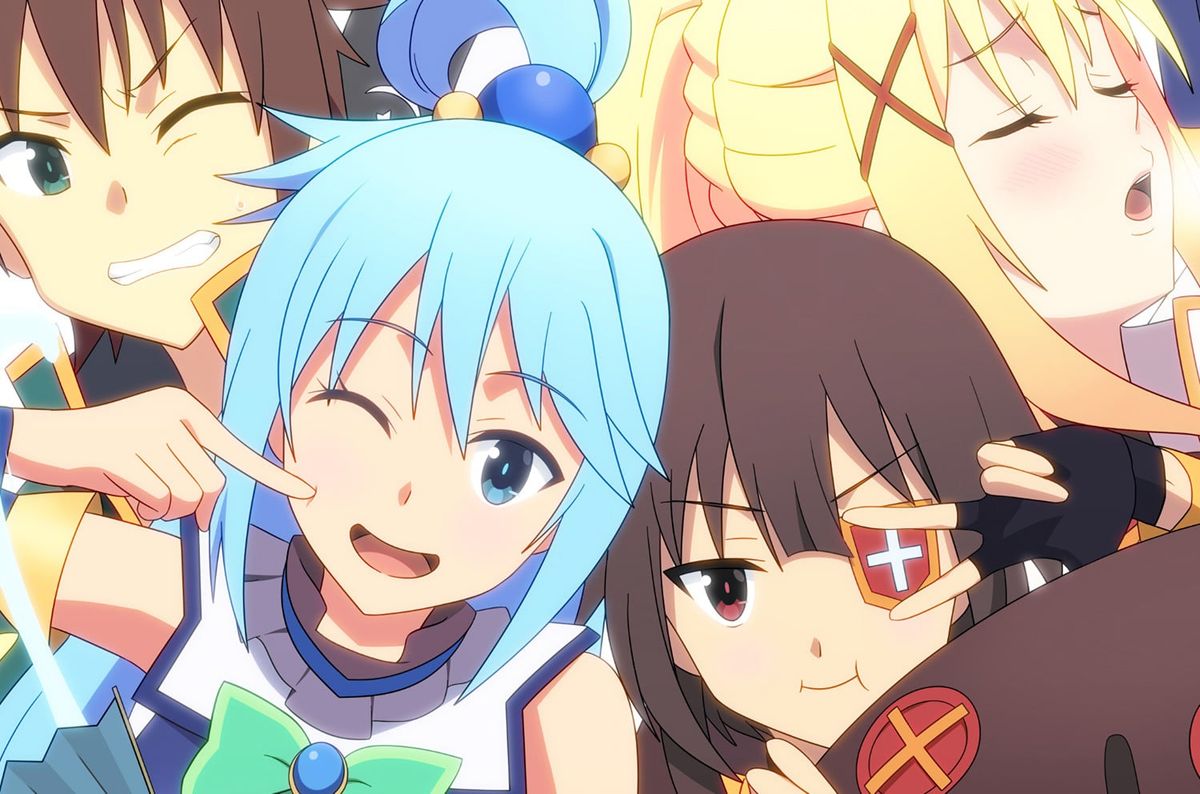 The series follows Kazuma Sato’s journey through the fantasy world with MMORPG elements after his death, where he forms a dysfunctional group with a goddess, an archwizard, and a crusader. KonoSuba has one of the best ensembles in anime, with the core cast of Kazuma, Megumin, Aqua and Darkness. In fact, you can see the creators had fun writing the dialogues for Kazuma and Darkness. I do not think many anime have leads who are outwardly vocal about… sexual implications of scenarios and dialogues. This actually ends up making even the fights ridiculously funny. It is actually mature in its content and therein lies the comedy aspect of the series which is usually found in Western content. 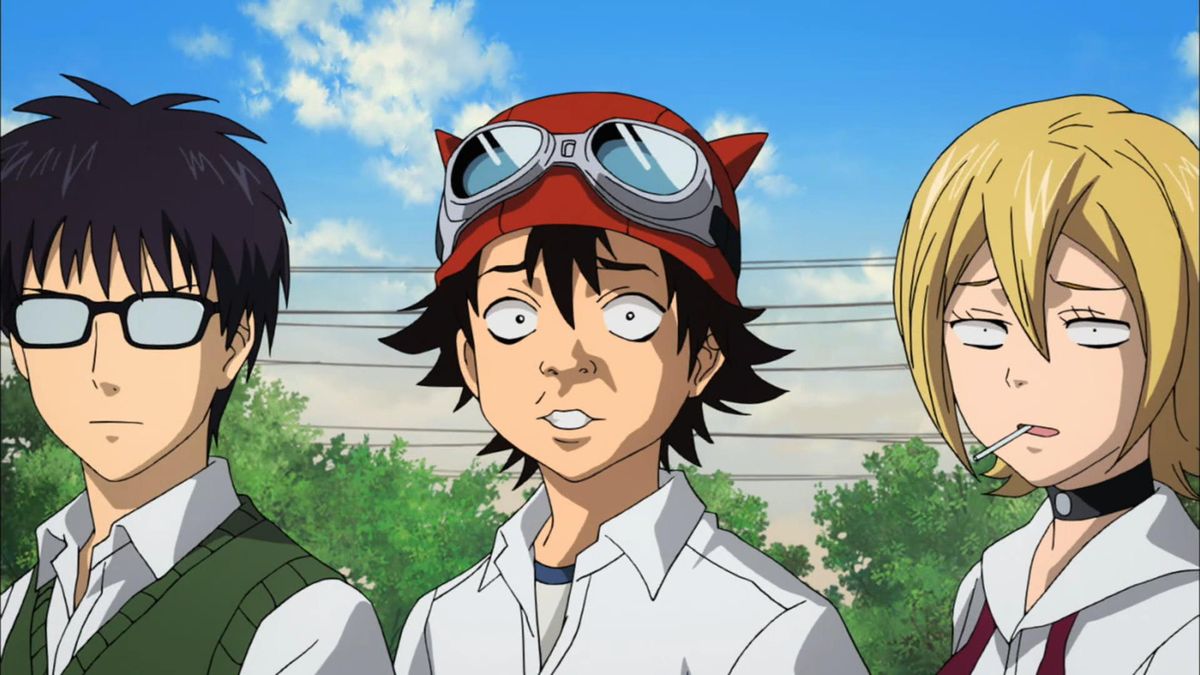 A high school club formed by the “Sket Dans” is formed by Bossun, Switch and Himeko- the clown and leader, the brain and the muscle. Their main job is to help anyone who comes to them no matter how odd and bizarre they get. A comedy anime doesn’t always have to make you laugh every 5 minutes, it can have action and mystery at the same time. Sket Dance has all, and best of all, it has the biggest overarching plot ever seen in an episodal anime: the tragic backstories of all 3 protagonists, that will leave you so heartbroken, especially because they have their own ending songs, and they are too emotional. Quite unique for an otherwise comedy anime.

Havent’t You Heard? I am Sakamoto. 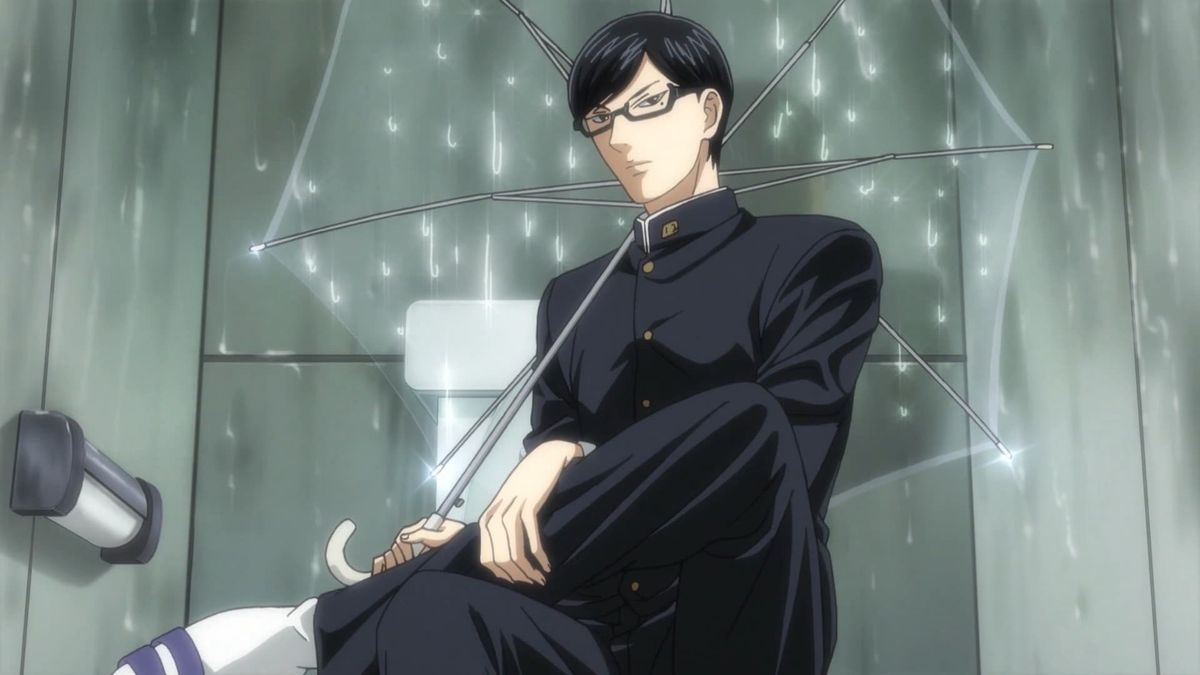 You know how the main protagonist is always “perfect in their imperfection” in anime, novels or in cinema? Well that is not the case with Sakamoto; he literally is perfect. Everything he does, even the most random and erratic things look *amazing*. Everyone loves him in the school, he is super popular among the girls, and boys look up to him. Even when bullied, he comes out way ahead of them and the bullies literally end up making him their wallpaper. He is PERFECTION, that is the whole point of this anime. The predictability of the show makes it even more amusing. 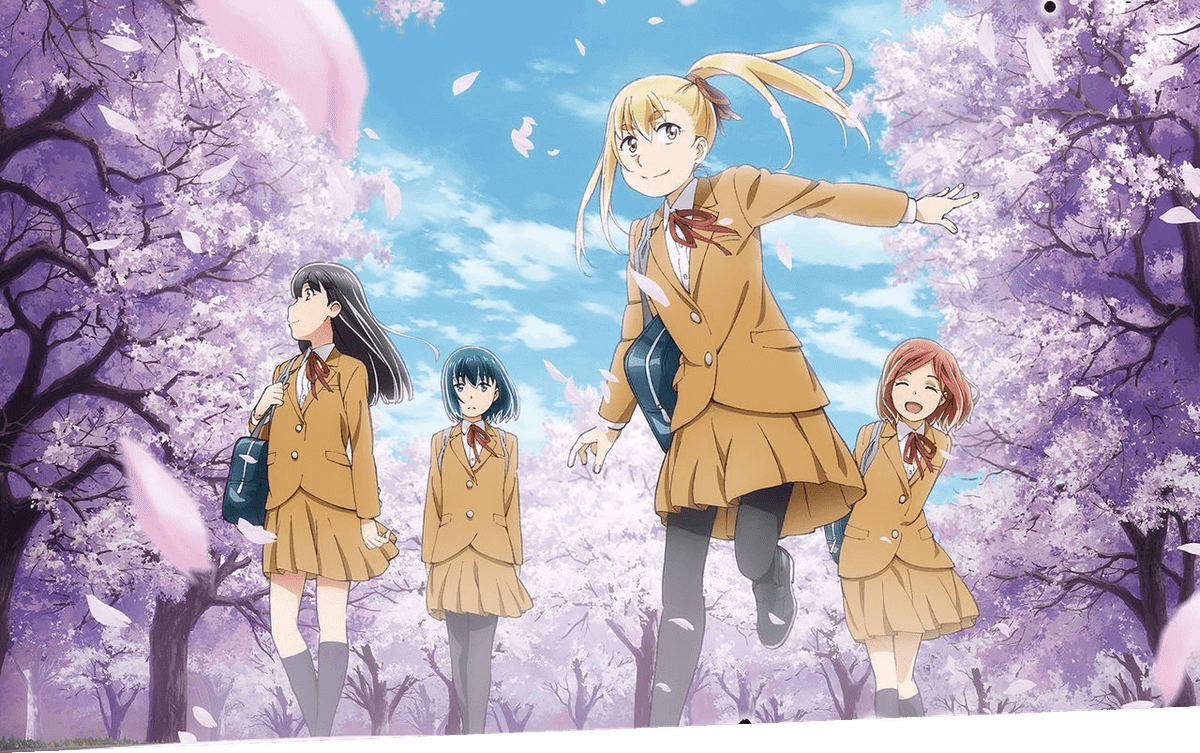 You start off thinking it is a very serious anime about the Yakuza and murders and crimes, everything sinister and then -bam- you’re on the floor laughing and crying at the same time because it is just that hilarious, and not even in the obvious manner. Like a metal egg-girl teleports and falls on the head of a yakuza member. How does this plot even come to mind?! The anime follows the journey of Nitta slowly becoming a father-figure to an absolute airheaded Hina, and their endless banter and obviously, adventures, both mob-related and extra terrestrial-related. Quite a premise, huh? The focus of the anime is a young Kitahara overcoming his fears and getting closer to his dream of diving. In the classic theme of finding one’s identity, Iori ends up joining Peek-a-Boo, his college’s diving club. The hilarious prospect lies in the wild depiction of buddies going out for drinks and making utter fools of themselves in the course of the night only to do it again the day after. Watching them get drunk when you are absolutely sober and then watching them get sober after going through a wild turn of events, is the real appeal of the series. 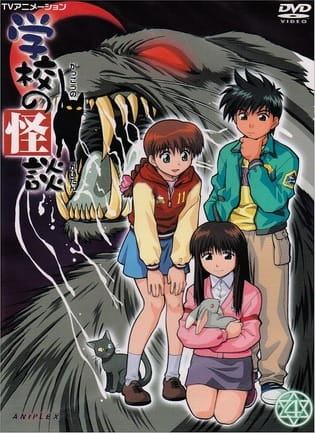 So the Japanese version is a normal group of kids trying to protect their town from a group of malicious ghosts. It did not enjoy much success in Japan and Animax approached ADV Films to create its English dub. Its unexpected popularity in the American market, put the company under huge financial pressure, so the dubbing team was given a unique amount of creative freedom. They actually changed the original dialogue completely to their liking and turned it into a knee slapping comedy instead of the original ghost hunting show. The first English dub of Ghost Stories has since become a cult classic; it has the “different” element through its dark humor and self-aware and also, highly offensive.

I feel that most hilarious anime depends a lot on the voice-acting skills of the seiyuu to fully capture the essence of the ridiculous art styles- when you watch any of these, or a funny portion in any anime in general, you must have noticed this extraordinary change in pitch to fit in with the exaggerated situations. Absolutely genius. It is vastly different from the western animation styles because they too have their own funny moments, but it is highly debatable if any of them can stand up to even 5 minutes of the absurdity of Gintama and Asobi Asobase.